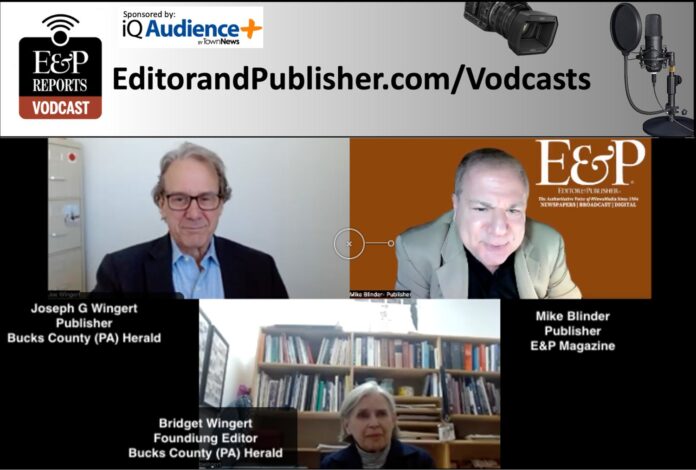 For just under two decades, residents in Bucks County, Penn., a suburb of Philadelphia, were served by the Bucks County Herald, a weekly publication started by Bridget Wingert and her late husband, Joseph T. Wingert.In 2020, as a global pandemic ravaged its advertising base, the family ownership, now including Bridget’s son and Publisher Joseph Wingert, had to face the possibility of ceasing publication, which so many other community news publishers did, leaving voids in local cities across the nation.

However, the community support for having a local voice was so strong that in the fall of 2020, the Wingerts donated their ownership to a new charitable entity which formed the Bucks County Herald Foundation, a registered 501(c)(3) non-profit organization, which through private and business donations along with advertising revenue has produced a sustainable business model that serves over 200,000 readers each week.

Recently, the foundation produced a compelling video, viewed by thousands, entitled “Miracle in Bucks County,” which even features a testimonial from CNN and SiriusXM host Michael Smerconish.

In this 171st episode of E&P Reports, we reveal the story of the re-birth of suburban Philly weekly, The Bucks County Herald, which rose from the ashes of the global pandemic through a transformation from a family-owned to a non-profit foundation-run local news enterprise. E&P Publisher Mike Blinder question Bridget Wingert, founding editor, and her son Joe Winegert, publisher, on how they formed the new entity, what the community support is like and is this business model one that others can easily replicate.