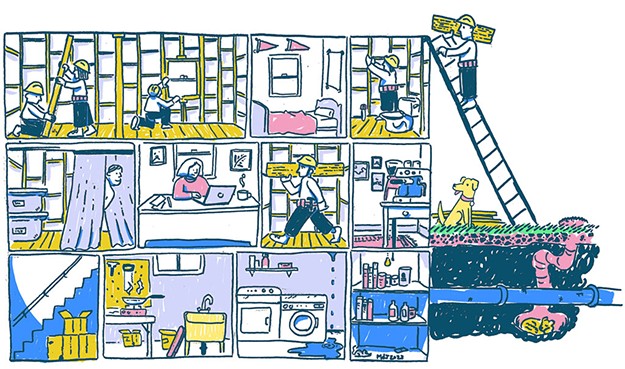 Initially, we thought we’d move out. We’re a family of six. Living in our house during its partial renovation seemed impossible — how would we manage without two bedrooms and the kitchen? But most people stay, our contractor assured us. The idea of saving thousands of dollars, watching our home’s transformation, being on-site as questions arose and saving thousands of dollars made our decision easy.

We packed up half of the house, sending furniture, breakables, and most dishes and cookware to storage. I moved a side table into the nearly empty dining room to set up my espresso machine and mega coffee grinder. Walls could crumble around me, but there would be coffee.

We moved our fridge, microwave, toaster oven and pantry to the basement. It has a cavernous utility sink, and I bought the few additional things we’d need to run a subterranean kitchen: a hot plate, eight plastic plates and four stemless plastic wine glasses. (There would be lots of wine.)

It was fun at first, like having a play kitchen. I had my toy dishes and my tiny appliances, and I could make real food. I fried eggs, sautéed vegetables, baked fish, cooked pasta and made waffles from scratch. When the New York Times featured a recipe for a potato chip omelette, I made a potato chip omelette.

I was absolutely giddy when rooms in our 100-year-old Burlington house were gutted to laths and bare boards, emitting an old wood smell. It was like the house, which had been holding everything in for so long, sighed and bared its soul.

We could see an old roof line and other evidence of how the house had been changed over time. We didn’t find any great surprises: no bodies, time capsules or hidden treasures. But we did find a tiny room — a pantry or a closet, we suspect — that no one had known was there.

Light streamed between cracks in exterior walls; you could see into the basement through gaps in the kitchen floor, and I could see our future. I had waited 22 years for this. Plans drawn up when I was pregnant with our first child got put aside when we had three more kids in the next four years. Finally, that ugly, cracked linoleum was gone; the warped cupboard under the sink was gone; the collapsing silverware drawer — gone!

Upstairs, the lavender-tiled half bath in the primary bedroom was demoed to make way for a full bath with a shower and two sinks. No more sharing the existing full bath with three teen boys and their raised toilet seat and lower standard of living.

Walls would be reconfigured to give the primary bedroom a sun porch and a bigger closet to replace the one tucked under the stairs. Weaving through the studs, envisioning how it would all come together, was exhilarating.

But we’ve been at this for seven months now. Living through a renovation is like raising kids: You jump in wide-eyed and enthusiastic, but it gets really messy before it’s over.

Our project started in the spring. “You can grill!” our friends said.

We’ve grilled twice. Prepping food in the basement, and then hauling it upstairs, outside and back in proved just difficult enough to deter us.

While painstakingly planning my new kitchen for maximum efficiency — dedicating zones to individual functions such as food prep, eating and cleanup — I’ve been cooking in the basement on a hot plate next to a sander, a vice, a router and a headless wooden giraffe awaiting repair.

If anyone eats in the basement — it offers seating for one — they sit on a Snap-on stool pulled up to a portable Festool workbench facing the band saw and table saw my husband can’t use because they’re barricaded behind boxes of books. Eating in the dining room means balancing your dinner as you walk up the basement stairs, unzip the plastic wall designed to curtail dust, then squeeze through. There’s an art to that last step: head first, followed by shoulders, then the rest of your body, the way a baby is born. It’s a plastic birth canal.

Throughout the house, rooms are consolidated. I wedged my desk between two bookshelves in our front room. As light fixtures, ceiling fans, faucets and tile samples have arrived, they’ve stacked up behind me. I can’t say that my makeshift office houses everything but the kitchen sink because it has housed everything and the kitchen sink.

When our hardwood floors were being finished, we had to come and go through the front door — which automatically locks behind us — and the exterior basement door, which has a tricky, old lock. We looked like prowlers, skulking around the place. When one of my sons got locked out one day, he scaled the bushes, cut across the porch roof and broke into his bedroom.

At least he and his twin brother got to stay in their rooms. My husband and I moved into our daughter’s bedroom — she lives in an apartment and has escaped the chaos. Our oldest son has fared the worst. Four days before he graduated from high school, we cleaned out his bedroom and shoehorned him into the basement.

Living with clutter is one thing; dust is another. I expected dust during demolition, but even now, during finish work, the finest powder coats everything. Wipe it away, and it reappears — even in places the laws of physics dictate it cannot reach. We breathe it and eat it. When I swab my nose now, I test positive for Sheetrock.

Our yellow Lab, Rosie, whose fur usually accumulates faster than dust in our house, seems to feel challenged by this. Nobody messes up this house more than I do, dammit. Game on. She’s shedding more than ever.

The dust rains down. The dog hair drifts like snow. And then the floods came. With downspouts off and scaffolding up, rain somehow gets funneled into the basement laundry room/kitchen to pool near the chest freezer and clothes hampers.

And then the rodents came. I hadn’t seen evidence of mice in our house since one fall about 15 years ago when I went looking for three ears of colorful corn I’d saved to hang on our front door. I found them picked clean, still artfully tied together with a raffia bow.

Now, I find little black flecks on the red-and-white-checked tablecloth draping my Festool table. I’m accustomed to starting my days by cleaning up after my sons, who eat in the middle of the night, but after a few mornings of sweeping up black sesame seeds, it dawned on me: Those boys are not eating everything bagels every night, and those are not black sesame seeds.

While the mice head in, the dog heads out. Rosie has capitalized on doors standing open. In November, a police officer found her twice on the same day, blocks from home. The first time, the officer gushed about our “sweet girl.” The second time, she warned that if it happened again, she’d take Rosie to the pound, and they would decide whether or not to release her to us.

We’ve alienated more than the police. Nothing endears you to neighbors like a home renovation. As if our lame landscaping and spindly tomato plants weren’t enough for them to endure, we parked a dumpster and a construction trailer on the street and planted a Porta-Potty on our south lawn.

And, of course, we’ve got tradespeople streaming in and out of here all day. Even though I work from home, I haven’t minded that. They make a lot of noise and sometimes their air compressor roars to life in the middle of the night, but I’ve worked in a big newsroom and comfortably tune out chaos.

Honestly, I think this is worse for them. I mean, what’s it like to go to work every day and find a family squatting in your office? She’s still here. And always with that damned espresso.

We’re clawing our way. Maybe we’ll get there. Or maybe, in another 25 or 50 years, when the next homeowner renovates, they will find a body. And alongside it, a plea for help, scrawled in the dust.