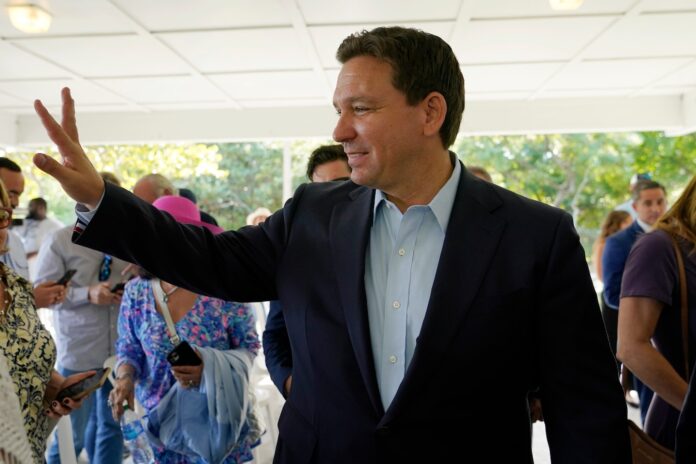 Early in the pandemic, Florida Gov. Ron DeSantis repeatedly praised President Donald Trump for the expedited development and rollout of a coronavirus vaccine. The governor’s office pushed for $480 million in pandemic resources, including media campaigns promoting the shots, according to state budget documents. And DeSantis, a Republican, even lauded the Biden administration for helping to expand access to vaccines.

“We’re having more vaccine because of this, which is great,” DeSantis said of a federal program shipping shots to pharmacies in February 2021.

But this past week, DeSantis threw himself into misleadingly disparaging the vaccines, convening skeptics to buck guidance from the Centers for Disease Control and Prevention and seeking to investigate vaccine makers for fraud.

“These companies have made a fortune off this federal government imposing or at least attempting to impose mandates, and a lot of false statements,” DeSantis said at the roundtable event on Wednesday. “I think people want the truth and I think people want accountability, so you need to have a thorough investigation into what’s happened with these shots.”

A review of DeSantis’s public positions on the vaccines shows a full reversal that has unfolded gradually since 2021, seizing on the shots’ waning efficacy against new virus variants and portraying evolving scientific advice as deliberate deceit.

The hard-line position he’s now staking out is taking on additional significance: DeSantis is widely seen as a potential presidential candidate in 2024, with many Republicans wanting him to challenge Trump for the GOP nomination and some seeing vaccines as a potential wedge issue to outflank the former president to his right.

“We know he’s not really anti-vax, he’s on the record, but now he’s taking this position for really blatant political purposes, it appears, and it’s really undermining to health care professionals,” said David Pate, a retired health systems executive and lifelong Republican who has advised Idaho Gov. Brad Little (R). “I’m not sure what the gain is, because he’s already got the base, and now this is just going to alienate moderates and independents.”

Spokespeople for DeSantis did not respond to detailed questions and requests for comment.

Trump has all but acknowledged his potential vulnerability on the issue of vaccines. He was booed in December 2021 for saying he received a booster shot. Then, at a rally in Alaska in July, he touted his administration’s response to the pandemic while avoiding using the word “vaccine.”

Tensions have grown between the two men as Trump formally announced his 2024 candidacy and DeSantis has risen as a potential rival, with chants of “two more years” at his reelection victory party on Nov. 8. Several early primary polls have shown DeSantis leading Trump; a CNN survey this month found one of the steepest drops in support for Trump’s 2024 bid among voters who describe themselves as very conservative. Skepticism about the vaccines and guidance from government health agencies has been palpable in the far-right wing of the party in recent years.

DeSantis’s event succeeded in drawing cheers from pro-Trump corners of the far-right. “What I like about DeSantis, he’s probably not a guy you’d like to run at, let’s go have a beer, but he’s all business,” former Trump strategist Stephen K. Bannon said on his podcast.

Supporters of DeSantis pushed back on suggestions — including from Trump allies — that the vaccine announcements were meant to outflank Trump ahead of a potential 2024 clash.

“If the left comes at him and says, you flipped because you want to be more anti-vaccine than Trump, he’s just gonna kill ’em with facts,” said Eric Anton, a GOP donor who said DeSantis would be one of his top choices for 2024. “If you want to call that political, then I think you’re too political.”

Even before DeSantis solidified his standing as the leading GOP alternative to Trump following a decisive reelection win, Republican strategists were quietly discussing Trump’s handling of the pandemic as a point of attack for DeSantis. But embracing a hostile position toward vaccines is not without political risk in the long run.

“Initially his position was much more reasoned where he was actually saying vaccines are an important tool but maybe he didn’t think it was necessary to mandate that. That’s a reasonable debate to have,” said Jennifer Nuzzo, a professor of epidemiology and director of the Pandemic Center at the Brown University School of Public Health. “Where I feel that the argument has improperly gone is to try to impugn the safety of these vaccines. … I hate to think that people’s takeaway is going to be that these vaccines are not safe and effective, and that is just simply false.”

DeSantis began as a full-throated supporter of the vaccines before he started bashing them.

Throughout 2020, DeSantis repeatedly praised the Trump administration for working with industry to accelerate vaccine development, production and distribution, an effort known as “Operation Warp Speed.”

“I think they’re putting all hands on deck for it,” he said in one interview on Fox News Channel. “I applaud the president. I think that’s the right approach.”

As the vaccine became available in 2021, DeSantis defended the rollout against frustrations with initially scarce supplies. “I can tell you, we wish we have had more vaccine every week, but it’s just being produced,” he said in a February interview with Fox News. “So, I think, by and large, the Warp Speed team did a great job.”

DeSantis appeared in person at vaccination-related events, such as a February visit to a World War II veteran, a stadium appearance in Pahokee, Fla., and a March discussion highlighting “Florida’s status as a national leader on vaccine distribution.” His office also touted partnerships with companies such as Publix supermarkets, a vaccine site for law enforcement officers and a rural vaccination initiative.

In the face of new variants that threatened to blunt the effectiveness of vaccinations, DeSantis stood by the shots. “We’ve not seen any data or any evidence to suggest these vaccines are not effective,” he said at a February 2021 news conference.

As the Biden administration took over, DeSantis demanded that the federal government’s “sole focus” be on increasing vaccine supplies, which he promised his state would deliver right away. He also attributed the vaccines’ successes to Trump.

“I think the credit goes to President Trump,” he said in an interview with right-wing radio host Mark Levin in April 2021. “If we’d had a Biden, or heck, if we’d had some establishment Republican, they would have gotten drowned out in bureaucracy. This would never have gotten done.”

In another Fox News interview that month, DeSantis said the state’s efforts to encourage vaccinations, especially among seniors, succeeded in bringing down hospitalization rates. He was so enthusiastic about the vaccines’ effectiveness that he criticized the CDC for initially advising vaccinated people to continue wearing masks and social distancing.

“I think the messaging should be, ‘Get a vaccine because it’s good for you to do it. It works. You’re not going to have to have to be doing anything abnormal. You can live your life,’” DeSantis told a crowd at an April 2021 event in Lakeland. “That’s got to be what the message is.”

He also specifically endorsed the Moderna and Pfizer vaccines, which were developed using an innovative mRNA technology that DeSantis has more recently criticized in public statements. Back in March 2021, when production problems caused a shortage of the one-dose Johnson & Johnson vaccine, DeSantis encouraged people to get the mRNA shots instead. “If you have your heart set on Johnson & Johnson but you are able to get Pfizer or Moderna, I would say get it,” he said at the time.

Later in 2021, DeSantis’s office formally asked state lawmakers to approve $480 million in additional funding for the state’s health department, specifying that the money would support coronavirus testing, medical staffing and “Media and Education campaigns in response to COVID-19 and associated vaccinations.” The current state budget authorizes using leftover money for fighting covid, including testing and “immunization.”

“If you are vaccinated, fully vaccinated, the chance of you getting seriously ill or dying from covid is effectively zero,” DeSantis said in July 2021. “These vaccines are saving lives.”

DeSantis began his shift away from vaccines by opposing mandates, calling a special legislative session to ban employer requirements in 2021. By January 2022, after Trump was booed, DeSantis wouldn’t say whether he’d received a booster. “I’ve done whatever I did,” he said. “The normal shot, and that at the end of the day is people’s individual decisions about what they want to do.”

The governor appointed a state surgeon general, Joseph Ladapo, who advised young men against getting vaccinated, citing a preliminary analysis that was not signed or peer reviewed and that was denounced by medical and public health leaders. Ladapo has given interviews on podcasts associated with the groundless QAnon conspiracy theory — an extremist movement the FBI has designated as a domestic terrorism threat. Back in 2020, Ladapo participated in an event with a right-wing group that promoted false covid treatments.

“You expect disinformation from social media, but to actually have these folks holding government positions is really a slap in the face in the health-care profession,” said Pate, the retired health-care executive.

DeSantis invited Ladapo to present that discredited research at Wednesday’s event, before appointing him to lead a state panel that would issue its own guidance to rival the CDC’s. The other panel members, introduced at the event, are prominent critics of the vaccines. They include the authors of a controversial open letter calling for lifting pandemic restrictions and letting the virus spread to achieve “herd immunity,” as well as an emergency room physician whose studies on adverse reactions to the vaccines have been rebutted by experts. At DeSantis’s prompting, the ER doctor said calling the vaccines safe and effective is “a lie. It has to be.”

At the event, DeSantis also announced a petition to the Florida Supreme Court to establish a grand jury to investigate fraud related to the vaccines. The formal petition cited government and company statements about the vaccines’ protection against infection over time. But instead of understanding those statements as reflecting evolving scientific evidence and resistant new variants, the petition alleges a conspiracy.

“It is impossible to imagine that so many influential individuals came to this view on their own,” reads the petition, signed by DeSantis. “Rather, it is likely that individuals and companies with an incentive to do so created these perceptions for financial gain.”

In a statement, Pfizer said regulatory agencies around the world approved the company’s vaccine based on independent evaluations of scientific data on safety and efficacy, confirmed by real-world studies. “Over the course of this deadly pandemic, mRNA vaccines have saved hundreds of thousands of lives, tens of billions of dollars in health care costs, and enabled people worldwide to go about their lives more freely,” the company said.

Nuzzo, the Brown epidemiologist, said the vaccines’ safety has been proven by the billions of doses delivered worldwide. There are rare cases of heart inflammation in young men that scientists are working to avoid with measures such as spacing out doses.

“Those are reasonable, science-based questions to have,” she said. “But when dressed as, ‘I’m going to ask for a legal investigation, that was just irresponsible. … You gave a national platform to them to basically advance the goal of anti-vaxxers.”

Is the COVID-19 pandemic coming to an end? | The Virus | ABC News