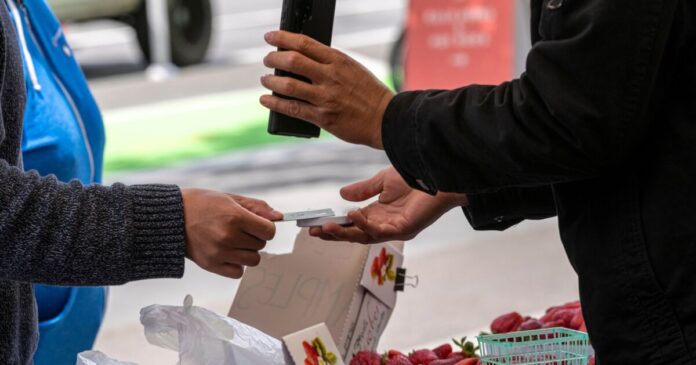 Consumer demand for credit cards is on the rise — and lenders’ rejection rates are down — even as the mortgage and auto lending sectors show signs of retrenchment.

The percentage of U.S. consumers who said they applied for a new credit card over the previous 12 months rose to 26.7% this year, up 3.6 percentage points from 2021, according to survey results released Monday by the Federal Reserve Bank of New York.

Among respondents who applied for credit cards, just 18.5% said their applications were rejected, which was down 2.4 percentage points from the previous year.

U.S. consumers paid down their credit card debt at unusually high rates during the early stages of the COVID-19 pandemic, with reduced spending and government stimulus payments contributing to healthier household balance sheets. But more recently, that trend has started to reverse, as consumer spending has risen and certain government payments have stopped.

A separate report last week by the New York Fed found that credit card balances rose 15% from a year earlier during the third quarter, the largest increase in more than 20 years.

The findings that credit card demand is rising are in line with what many banks said in their third-quarter earnings reports.

The New York Fed survey did include some signs of greater caution among credit-card issuers. Respondents said they were more likely to have been rejected for a credit limit increase in 2022 than during the previous year.

A recent Federal Reserve Board survey of banks’ senior loan officers found lenders planning to tighten their underwriting standards across various loan categories in the event of a recession. Eighty percent of the respondents said they would raise their qualification standards for new credit card applications in a recession.

For their part, consumers told the New York Fed that they plan to apply for more credit cards over the next year than they did previously. The average likelihood of applying for a credit card over the next 12 months was 12.6% this year, up from 11.1% the previous year.

The New York Fed conducts its credit access survey every four months. The latest results include responses to surveys of consumers conducted in October.