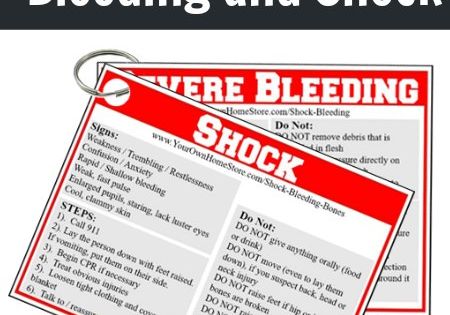 A person who has suffered severe injury is at risk of developing shock – a steadily worsening condition that can be described as a “running down of life forces”.

First aid can minimize the development of shock if the possibility is recognized well in time. In fully developed shock, minimal first aid is possible, but it is still important until the victim can be got to a medical facility.

In medical terminology, ‘shock’ refers not to an emotional upset, but to a physical condition – a failure of the heart to provide adequate circulation to all parts of the body. It is caused by a loss of blood fluid, typically following severe injury.

When there is severe bleeding, the reduced volume of blood in the body results in a weakened heartbeat and inadequate supply of oxygen and other nutrients to the tissues. In particular, the centres in the brain which regulate respiration, heart action and blood pressure no longer work adequately. A vicious circle is therefore set in motion.

Below are the situations that can cause different types of shock:

also called ‘bleeding shock’. This is the most common form of serious shock resulting from the loss of blood, as in burns/crushing injuries. The bleeding may be internal or external. If the person is in a state of dehydration or is sweating profusely, it can hasten the onset of shock. This can typically happen if a burns/crushing injury occurs in a workplace of high temperature.

Also called ‘heart shock’. It results from a failure of the heart to pump blood adequately to all parts of the body. Typical causes are: electrical shock, heart attacks and injury to the heart. Diseases like low blood pressure and oedema of the ankles, if untreated, may do enough damage to cause cardiogenic shock.

Also called ‘nerve shock’. It results from the failure of the nervous system to control the diameter of the blood vessels. The blood vessels dilate beyond the point where the available blood can fill up the new volume. Blood no longer fills the system adequately, but pools in the blood vessels in certain areas of the body.

Typically, this kind of shock is due to nerve paralysis caused by spinal cord or brain injury. Severe blows to the abdomen can also disrupt the nerves, bringing about neurogenic shock.

Also called ‘lung shock’. This results from a failure of the lungs to provide enough oxygen for circulation to the tissues. Watch out for it in cases of fractured ribs or sternum, deep chest wounds, neck/spinal cord injury or airway obstruction.

Also called ‘body fluid shock’. It may occur in cases of severe diarrhoea, vomiting or polyuria (excessive urination). These conditions cause the loss of fluids from the bloodstream.

Also called ‘allergy shock’. This is a life-threatening reaction of the body to an allergen (something to which the person is extremely allergic).

The most significant symptom of shock is:

Other symptoms may include:

The signs to look out for are:

It’s important to remember that, immediately after serious injury (for example), the victim may appear tough and resistant, but that, inside him, the machinery of shock may have been set in motion. It may be a matter of some minutes before he shows the typical signs, or it may be several hours.

A person in shock must be got to medical attention urgently. In the meanwhile:

Finally, remember that in situations where shock is a distinct possibility (such as significant blood loss), it is advisable to carry out all the above steps, even if the patient’s condition seems quite stable. The bottomline is: when in doubt, treat for shock.

How To Treat An Open Wound