After a successful Season 1 where Viking players were treated to Fenrir, Tribes of Midgard is back with the next saga titled the Serpent Saga. This time around the World Serpent, Jormungandr, appears in Midgard for the Einherjars to take down.

In Tribes of Midgard, players step into the role of a fallen Viking warrior chosen by Odin. The game offers a blend of action, survival and roguelite elements set in the backdrop of Norse mythology. Players can band up to ten players to form a tribe and protect the seed of Yggdrasil. The procedurally generated world is filled with colorful creatures from Norse lore that test the mettle of players.

Dive into our newest free seasonal update, featuring a new Saga Boss, Boats, new enemies, the Ocean biome, swimming, and so much more! 🌊

Angshuman Dutta of Sportskeeda Esports engages Julian Maroda, the CEO of Norsfell, in a discussion about what players can expect with the new season, a look at the game’s mythology and what the future holds for Tribes of Midgard.

In conversation with Julian Maroda, CEO of Norsfell, about Tribes of Midgard: Serpent Saga and what Einherjars will find new in it

In the conversation, Maroda explains the developers’ deep love for Norse mythology and why they wanted to explore the lore within the gamespace of Tribes of Midgard. The latest saga is a step towards their end goal of creating the “ultimate Viking sandbox.” 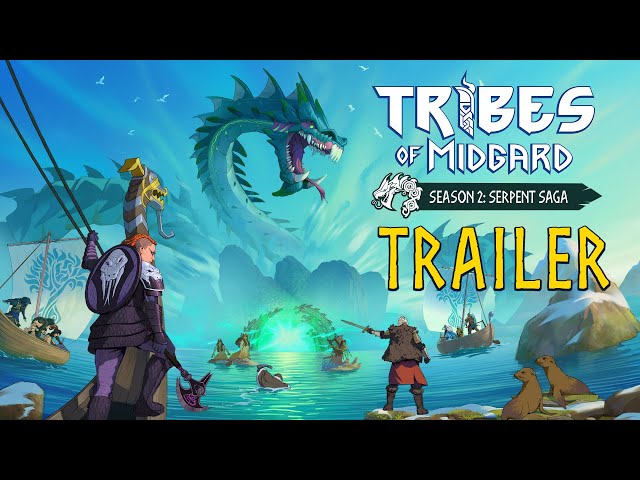 Here is an excerpt of the conversation.

Q – Julian, right out of the bat, what would you say are the most exciting aspects of the new season for the one million Vikings who are hooked onto Tribes of Midgard?

Julian – The addition of boating and swimming really changes the way players can approach the game in a wholly natural way. You now have more area to traverse before Ragnarök, but boats drastically speed up travel time. We’ve seen players use this to their advantage – you can scout for specific resources and Biomes from the Sea, then stage a true Viking-style raid for those hard-to-reach lands!

Q – How would you introduce Tribes of Midgard, the base game, to the newcomers in a few words?

Julian – Tribes of Midgard is Norsfell’s take on Vikings in a blend of action, survival, and roguelite elements. It’s a unique game that aims to create a new genre we call “surthrival,” where traditional survival mechanics change from focusing on individual survival to thriving as a team (or a Tribe!).

Q – The world of Tribes of Midgard is deeply invested in the realm of Norse mythology. What inspired you to set the game there?

Julian – Our team has always been fond of Vikings and Norse mythology; even down to our company name and logo! We did a lot of research on Norse legends, and were always aiming to put a new spin on some of the traditional elements in Viking culture: larger than life creatures, grandiose storytelling, unwavering bravery (along with axes and beards… the whole host of colorful characters that come from the nine realms).

From there, our focus was not just on what to include, but how we wanted to put our own spin on each of these to make sure some of the lesser known myths were also exposed to our players in a very colorful fashion. Our goal was to create the brightest Ragnarök that’s ever been seen. In the end, you play as an Einherjar, a fallen warrior chosen by Odin, and have prepared all your life for this glorious moment!

The sense of awe is one of the important game feel pillars in Tribes of Midgard, we wanted the game to feel like one of those larger than life, tall tales of legend. Something that feels recognizable but also unique in the way we approach the story.

Q – A bit connected to the previous question, recently there has been a flurry of popular games that have decided to explore the Viking mythos: God of War, AC Valhalla, and of of course, Valheim comes to mind. Why do you think that is?

Julian – When we started envisioning Tribes of Midgard in 2017, we identified three trends in the industry:

1) Cooperative gameplay grew in popularity with the rise of PvP games.

2) Survival games were beloved, but were still considered very hardcore and not the most approachable.

3) Vikings media was on the rise, as we saw in the dawn of the Vikings TV series and the popularity of the Thor movies.

We wanted Tribes of Midgard to evolve at the crossroads of these three trends and combine genres in ways we’d never seen in a game before. We couldn’t have imagined just how well those trends would materialize industry-wide in 2021, but it’s both gratifying and intensely interesting from a high-level that we weren’t the only ones looking at these trends!

It just makes me happy that we always set out to approach Vikings and Norse Mythology with our own differentiated “take.”

Q – It’s been a long time since Tribes of Midgard launched. How has your experience been with the game and its reception?

Julian – It’s truly incredible to see more than a million Vikings all out there defending the Seeds of Yggdrasil and preventing Ragnarök. We’re so humbled by the player response, and we couldn’t be more grateful to our community.

We worked with them as a partner for years, and some of our biggest fans have been invaluable contributors. We have a dedicated group of community members that we call “Midguardians”, from whom we regularly collect feedback, discuss ideas and just enjoy talking Tribes of Midgard with.

Q – With Fenrir and Jormungandr already in the fray, who are we meeting next? Will Hell be joining her siblings? Do you have it chalked out somewhere which mythological characters we are likely to see?

Julian – I can’t share too much about our upcoming Saga Bosses, but keep your eyes peeled in 2022 for more!

Q – To conclude, what is your vision regarding the future of Tribes of Midgard?

Julian – We will keep the game fresh with seasonal updates that we call Sagas, and we’ve already shared an early look at our content roadmap for future development. Our ultimate aim is for Tribes of Midgard to continue to grow. We want to keep adding content and create the ultimate Viking sandbox that will keep on expanding for months (years) to come!

Best of all, not just Saga 2, but all Sagas are free to anyone who’s bought the game. For example, when a new Saga comes out, you can still play through the past Saga and aim to take down all Saga Bosses in the same session. This will just keep on growing into its epic tale of challenges!